The Thumbport II has a lower default angle for the thumb. It’s a little thicker and more rigid. It touches the flute tube less. And, its extension arm is a little shorter (when attached to the flute, it may go into the case easier for some). Also, the end of the extension has a more rounded shape.
Read more: Thumbport Instructions

The Thumbport II has a lower default angle for the thumb. It’s a little thicker and more rigid. It touches the flute tube less. And, its extension arm is a little shorter (when attached to the flute, it may go into the case easier for some). Also the end of the extension has a more rounded shape.

Thumbport-Theory Behind Holding/Balancing the Flute
The Thumbport allows greater balance in holding the flute. It is comprised of a C-shaped shell and a thumb-like extension. The Thumbport helps the player to place the right thumb at an efficient spot and provides additional support.

Mechanically, there are 3 factors associated with balancing a flute:
1. the mass (weight) of the flute,
2. horizontal rotation,
3. axial rotation.
The gravity center of a flute is located slightly to the right of the left index finger (see letter G in Illustration 1 below). When the knuckle of the left index finger takes up most of the weight of a flute at number 2, the small remaining weight is often assumed by the right thumb.
When playing a flute, the player pushes the embouchure plate against the chin (Ill. 1, number 1). With the left index finger both supporting and pushing, the flute might rotate clockwise without a counter force from the right hand.

Additionally, the uneven weight of the flute mechanism contributes to another rolling tendency. This can be seen in Ill. 2. The flute rolls backwards toward the player.

Because nine of our fingers are used to operate keys on a flute, only one, the right thumb, is left to decisively balance it. Many flutists knowingly or unknowingly use their right little finger to help. In doing so, it reduces the agility of not only the little finger but also the other right hand fingers.
Thumbport Solution

The Thumbport guides one’s right thumb to support the flute at an angle (see A in Ill. 3). The force (A) created by this angle can be seen as the sum of two partial vectors: one supports the flute from below and the other counters the horizontal rotation. The extension arm rests on the thumb gently (see B), which easily prevents the flute from rolling backwards. 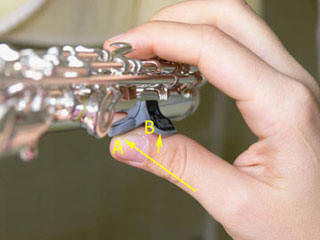 Please note: Express & Overnight Shipping deliveries will require a signature. Please ensure someone is available at the delivery address to provide a signature to avoid any issues.

Please be aware that orders with certain products may take longer to deliver depending on their stock levels and lead times.

For information about our Return Policy, please check here.

Collection of Information
We collect personally identifiable information like names, postal addresses, email addresses, etc. when voluntarily submitted by our visitors. The information you provide is used to fulfill your specific request, process your order, and/or to add you to our mailing list.

J.L. Smith & Co, Inc does not use cookies to collect any information other than the information you provide at the time you register. J.L. Smith & Co, Inc cookies will not damage your system or files in any way. If your browser does not support cookies, or if you have turned them off, you will still be able to use our site, but e-commerce ordering may not be as simple.

Distribution of Information
We may share information with governmental agencies or other companies assisting us in fraud prevention or investigation. We may do so when: (1) permitted or required by law; or, (2) trying to protect against or prevent actual or potential fraud or unauthorized transactions; or, (3) investigating fraud which has already taken place. The information is not provided to these companies for marketing purposes.

Commitment to Data Security
Your personally identifiable information is kept secure. Only authorized employees, agents and contractors (who have agreed to keep information secure and confidential) have access to this information. All emails and newsletters from our site allow you to opt out of further mailings.

Technology Used to Protect Your Privacy
We use the latest SSL Server Certified 128-bit encryption to protect your data. J.L. Smith & Co, Inc protects you and your information by using a Secure Socket Layer (SSL). SSL transparently encrypts the data between your browser and our server so we can better process credit card orders and protect sensitive personal information.